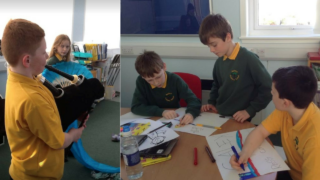 One child is painting in response to a drum beat while another is playing the xylophone inspired by a dance..... Just an average USB session!

But how did we get here without resulting in mayhem?!

The vision of Unique Soul Beats is to help children develop their own creativity in a community. The tagline is - Inspire Create Collaborate and through gentle confidence-building activities, children are inspired to express creativity and then collaborate with others. The club values are - Freedom, Respect and Community, which we always discussed at the beginning of the session.

We remembered our core values, thought about what they meant and how we could show them throughout the session.

A typical session would start with a circle time to discuss values, energetic warm up and then a workshop to develop one aspect of the arts. 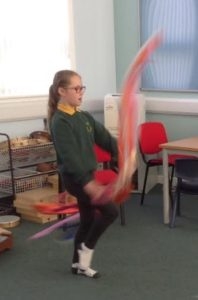 If the focus was movement, children would start by creating different shapes with their hands, then arms, facial expressions, first individually, then with a partner then in a small group. Affirmation is key at the beginning and I always encouraged their unique expression. This would develop as the weeks went by to being able to lead the whole club in an improvised dance. Throughout the dance, children can pass onto another leader to take over. During one session, another teacher came in and through we had practised something that was choreographed when in fact it had been created in the moment. 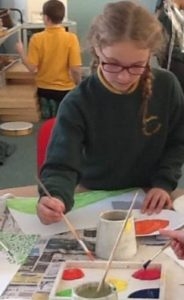 In the art sessions, children were encouraged to relax, listen, imagine then express creatively through art. Some children used lots of dark colours with big movements and some seemed to come with their own ideas of what they wanted to paint. All was OK and where they were at the time. As the painting workshops developed, children would then collaborate by adding to each other's artwork. If someone drew a circle, another could decorate it, perhaps by adding a frame. One child took this time to design a mobile phone, that was fab! 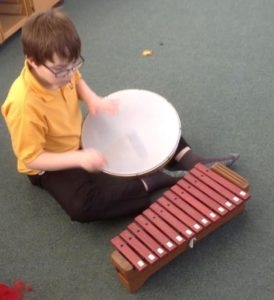 Inspired by teaching by Orff, children started music sessions by experimenting with the instruments and the sounds they make independently. As long as they were respecting the instruments, they were free. It was noisy!! Then the workshops helped them gently refine how they played, for example mirroring a partner's music. Once they were ready, we developed rhythm making and how to work with a partner to put simple rhythms together within an AAAB AABB frame.

As weeks went by children, they learned to listen and respond to each other more and most of the session could then become 'free flow'. These were the times the children loved the most. Inspired by a piece of simple music, children responded through movement, art or sound and could move around between the areas. When the group was big, sometimes I did need to organise it more formally to have a certain amount of time in each area before rotating. There were times where it did feel a bit awkward and also some beautiful moments of harmony.

Believe it or not, the club started with me offering my P6 class the option of a recorder club. They very quickly said that they wanted a club that involved movement or drumming. The idea of USB was born! The class were involved in the creation of the logo and I tasked them as designers to try and capture the ethos of the club. I was AMAZED how each and every child just got it! Some focused on the community side and some on the creativity. One child beautifully wrote - 'Be yourself'.

Once the vision and identity were developed, I sent a letter home to parents so they were aware of what their children had chosen to join. As the group continued, roles were given out. We had a greeter and someone who helped people, sign in. Some set up equipment and put our posters up. There was a real sense of responsibility and joy that the children got from doing these jobs, I was really surprised at that.

It was also interesting to see how creativity developed. At the beginning, some children would want to play instruments loudly but with time they learned to listen and respond with a simple addition to flavour the music already playing. 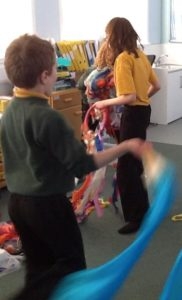 Some feedback from the children...

"I enjoyed the art and the music because it made me feel alive and creative."

"I enjoyed the creative side of USB. I found it relaxing and lots of fun."

"It was very good, I enjoyed it a lot. Thanks for making this club because I loved being there."

"I enjoyed the calmness of the sessions."

"This was AMAZING. I think you should do it again. I'm more confident now at drama and things like that."

"It was fun, I liked doing what we wanted. I liked everything, art, movement and music."

"I liked that everybody was free."

"It smells nice and there was not a lot of noise, I wish there was more"

"It was fun to dance, I wish there was more room"

"I did things, I never thought I would have the guts and courage to do. I had the time of my life with all this freedom".

I work part-time so took time on my days off to prepare. I think the free flow time is very sustainable as doesn't take a lot of planning time but the skills development took a lot of careful preparation as I wanted to keep to the values and ethos of the group. One point that children regularly made is that they felt free. This was interesting as in my head I had carefully planned the activities in a structured way. I think that once the children 'get' the idea, it is very sustainable.

I spent about 10 pounds on extra art materials purposely for the group to develop ownership and responsibility.

Some musician and creative movement friends were interested to join but couldn't attend the dates I had planned. They said that they would love to help if I ran it again. I borrowed some fabric and ribbons from King's - Inverness. Inspired by courses and teachings by Orff.

My school gave me use of the music room over lunchtime and art supplies.

I think if this developed, other forms of creativity could be involved, photography, coding, video making, maths, science. That would be a great collaboration! Any questions or ideas with how to further develop this, please get in touch.