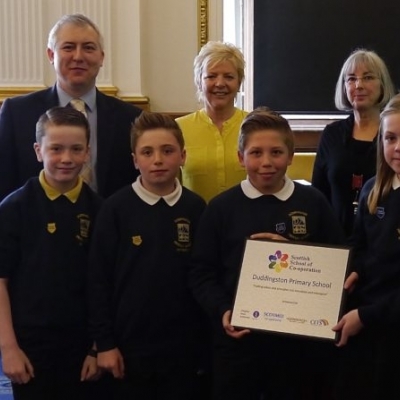 A competition was run asking pupils to draw characters to represent these values. They then voted on the ones they liked best and they now adorn the school and playground, are used as constant references and reminders for the school's shared values. The pupils "police" this policy themselves and have a say in how best to deal with individuals who are not following the agreed values.

For example if a child is not showing respect, they are reminded about "Rebecca Respect", or found not telling the truth they are referred to "Harry Honesty".

By taking responsibility for and embedding citizenship values throughout the school and its community they are also embedding co-operative and enterprising behaviour, developing skills which can be transferred to economic and social activity beyond the playground.

The pupils now have a wider perspective of how their school's values are shared in their own community, Scotland and the wider world.

Now that the characters are visual and referred to in all areas of the schools activities the values are now embedded in thought and action.

CETS were invited to attend a pupil council meeting and the pupils were able to see that a worldwide co-operative movement shared the same values as they did! After discussion with the pupil council, it was decided that they would help CETS to spread their message of shared values by coming up with some activities that would help other schools learn about and understand and apply Co-operative Values.

The next step is for pupils engaged in this enterprising project to pilot these materials, add or modify where required, write a short report and then allow CETS to share them with all primary schools in Glasgow, as well as across Scotland - very co-operative!

Sustainability of this projects will be enhanced and spread through this CETS and Eastbank Primary link.

The only costs were buying paint to illustrate the values characters in the playground and some fabric for costumes which parents and pupils helped to make.

The main partners were the parents and local community who became involved in all aspects of embedding the values chosen by the pupils.

CETS is involved in sharing this approach across Scotland and showing that these values are part of global co-operatives.