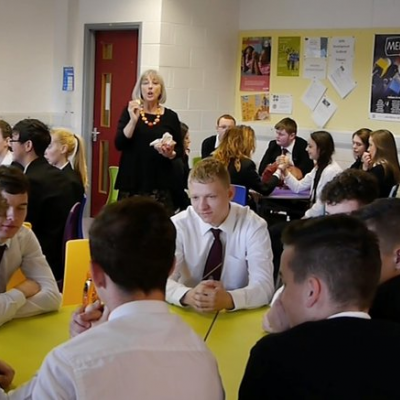 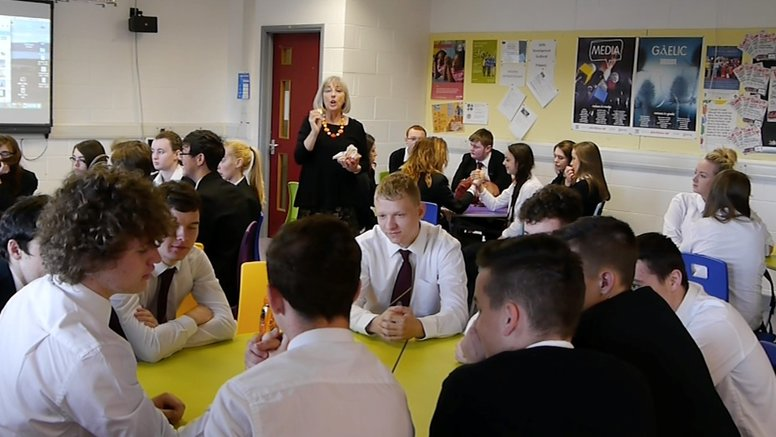 Pupils in the senior phase were invited to attend a two day conference where they could explore different courses subjects and enterprising activities to make their final year at school the most worthwhile and productive they could.

CETS provided a 90 minute workshop for students around what co-operative enterprise is and how that could be applied and used within their school and community. 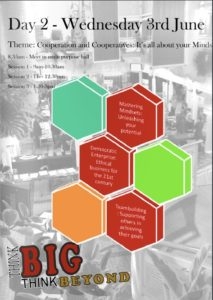 In June 2014 West Lothian College invited our director, Hugh Donnelly to speak as a guest lecturer about Co-operative models and their social impact.

Morag Pendry then met with Moira Niven, head of Education for West Lothian, and offered to develop the CETS Co-operative Schools programme as well as support for introducing CETS new SQA awards in co-operative studies to their secondary schools.

The only stumbling block was finding some funding , which then was acquired through this Scottish Government project.

Morag presented CETS opportunities for resources and support to all the schools at a meeting for the department heads for skills for life work and learning group.

St Margaret's Academy was the first schools to request support for introducing SQA awards in Co-operative Studies and expressed and interest in becoming a Scottish School of Co-operation.

After discussion with head of schools, Elaine Cook, and the Work Experience team, it was decided that St Margaret's would be the pilot schools to trial this approach with a view to introducing to all 11 secondary's across the authority.

Initially the plan was for groups of S4 (end of S3 pupils) to study different modules of the SQA award in May and June during study time. However, due to the short time scale it was decided to introduce this for session 2015/16.

As the senior pupils had space in their end of term timetable, it was more appropriate for this stage to be the focus for learning about co-operative models.

CETs then helped to organize and deliver a senior school workshop day for 150 pupils.

Feedback was very positive with students having opportunities to discuss what the difference was between PLC's and co-operatives. Students had not heard about co-operatives before and most thought that seemed to be a good way of developing business which allowed them to make a profit, be democratic as well as consider environmental issues.

As all students will be expected to engage in self- directed activities in their senior year, many felt that creating a co-operative business would be a good idea. When it was explained that CETS SQA award in Co-operative studies would allow them to get accreditation for activities that would normally not attract qualifications, many were keen to find out more and would consider completing one or more of the modules in their final year at school.

A straw poll of what students intended to do at the end of their 6th year indicated that the vast majority wanted to go to university, some to college and two or three intended to seek employment. None of the students had considered self- employment or setting up their own business.

He has now timetabled co-operative studies into the S3 timetable for session 2015/2016, with the view to theses students completing the required modules by the end of their 5th year.

West Lothian Council will asses this pilot school with the aim of encouraging all 11 secondary schools to copy St Margaret's model.

Discussions were also had with West Lothian College who are considering a partnership with St Margaret's with students completing part of the SQA award in Co-operative Studies at the college. West Lothian already has in place partnership working with the College and this would extend courses and experience for the students. Scotmid are also interested in being an employer who support this SQA award.

Scotmid supplied refreshments for the day and have offerd to arrange visits for students to their headquarters who are studying for an SQA award in co-operative studies.

Morag attend a partnership meeting with all the ASN schools to share the Co-operative approach model. They are interested in applying for becoming Scottish Schools of Co-operation but felt that the SQA award was too challenging for their students. However a group of the teaching staff would be very interested in developing a Co-operative course/ award for their ASN students if funding for this could be found. CETS would have been happy to support this initiative, but as this discussion was not had until June 2015, there was no time in session 2014/15 to use current funding to develop this resource but discussions are still ongoing.