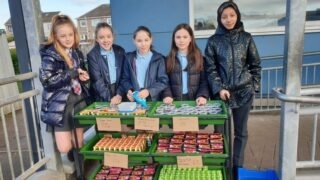 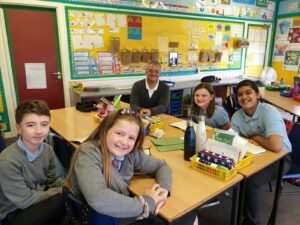 We have scheduled "Citizenship" time in our timetable, one hour on a Tuesday afternoon, for two terms of the year. This started last year with my P6/7 class last year and we had three citizenship groups: The gardening group, Foxley Care Home group and the homeless street team group.

Last year there were only the three Citizenship groups, as I was running this on my own, but this year we have it through Primary 6/7 and 7, and have seven citizenship groups now.

At the beginning, we asked the children what the needs of the community were, where we could help and what we could do that would be beneficial. We came up with a long list of different people and ways we could help. The children voted, so the list was narrowed down to seven.

The pupils were then asked to put forward two choices of which group they would like to be involved in, to make sure they each got one of their choices - because there's no point in doing it if the children haven't got an interest in it, it wouldn't work.

The seven citizenship groups we have are: 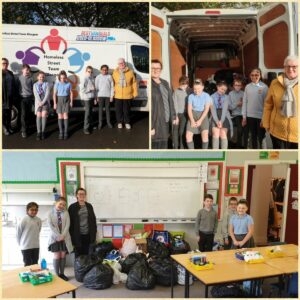 This group have been collecting items around the school and from our school harvest, that they donated to the homeless. The group have also been working with an organisation called 'Turning Point' who came into the school to discuss with pupils why people might become homeless.

They've been looking at what reasons could be behind this and what kind of skills could potentially support people in this situation. 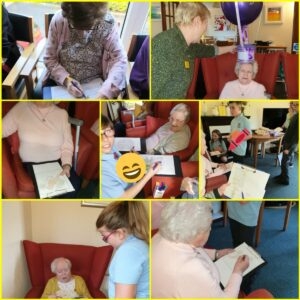 We have a large group for the care home but we can only take ten pupils at a time, so this group has been split into two. One week the group would decide what they would do with the elderly people at the care home and then the next week they would go in and do it. So each group visits Foxley Care Home every two weeks.

We started that back in January and have created great links in the community there, it's working brilliantly. We've stopped this now but we're hoping that it in the future this will go on with the younger class and have the older children go along as well. 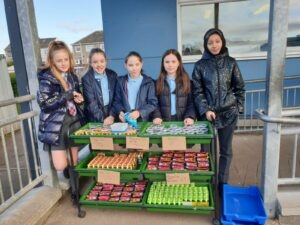 This started off as a climate change group that has grown arms and legs, we have now split this group into two with different focuses.

This group have been learning about Fairtrade and have their own fair-trade tuck shop up and running. The tuck-shop will continue to run into next year as this is now established and working really well. 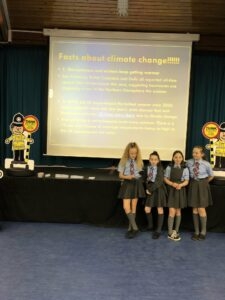 The other side of this group works on climate change. They've been working to promote 'Ecosia' which is a search engine that for every certain amount of hits they get, they plant a tree somewhere in the world.

They've been promoting this through our app and encouraging other people to use this search engine. They have been working on lots of different things to do with climate change and this group will continue on a lunchtime basis, instead of time scheduled during class, as they have projects ongoing that they want to work on.

They want to save the world!

This team wanted to run a café for parents and the community to come in but unfortunately, this wasn't as successful. We didn't have a lot of people coming to the café. We held this on the last hour of a Tuesday (2:15 - 3:15pm) trying to encourage people to come in for a quick cuppa but we only had around six or eight people over two weeks.

The pupils tried to advertise and promote but some things work and some things don't. Even though it wasn't successful it was still a learning experience for the team, who tried different ways to advertise and assessed what wasn't working and then came up with more ideas like posters at the school gates etc. This team also worked with the Fairtrade team to supply fair-trade tea and coffee at their café.

The Café team then joined the fundraising group who were thinking of ways to raise money. In the end they made slime which they then packaged in tubs and sold.

They've made over £200 doing this alone and this money is going to our local Dogs Trust, as they wanted to keep the money in the local community. 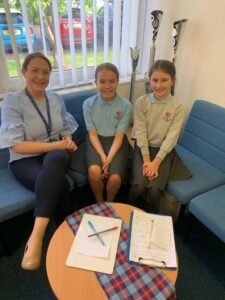 This team have been using the green screen and filming themselves to share news stories. Unfortunately, the technology in school didn't hold up for this kind of thing so they created their own newspaper - which instead of printing, they have decided to share via our app. They're in the process of finishing this at the moment but pupils who were involved have been researching different topics, including the rainforest, and have been watching BBC Newsround. They've also been writing film reviews.

The group also worked with the homeless group and interviewed one of the parents who works for 'Turning Point', which featured in the newspaper. You can see a picture of them interviewing our Headteacher below. 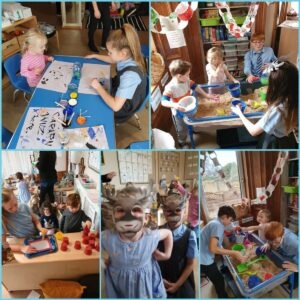 We have links where we do reading buddies with a local nursery but this group has also been working with another local nursery.

The nursery group have been working in a similar way to the care home group, where they have been preparing things to do one week and the next week have been going into the nursery and doing these with the children.

We've also invited the nursery, and the elderly people from the care home, to our dress rehearsal for the nativity play.

We had a discussion with the two classes to ask what they enjoyed, what they got out of it, what did other people get out of it and what they would do differently. The children have been really involved in the feedback process.

I thought a lot of the discussion would be about what they could do differently but it wasn't. They said that they had grown in confidence, they'd gained presenting skills, advertising skills and teamworking skills.

The biggest impact it has had though is that the children can see the impact that they are having. They're realising what a difference they can make, I think that's the biggest thing.

Some of the pupils who are involved with the homeless group are really focused on the injustice of of this and have been calling on MPs.

A lot of them also fed back that being able to take responsibility was a big impact the groups have had. The way we've run it is that they lead and steer their own group. We accommodate you but it is your group, your ideas - what do you want to do with it? They had total ownership of it which really, really worked because they then knew that they were responsible for it.

It has worked absolutely brilliantly. We began with what we wanted to change and went from there. Even with things like the café that failed, they still learned from this. It was a learning experience and there wasn't ever anything they disliked doing, it was just sometimes, things didn't quite work out.

Is the project sustainable? How do you see it developing in the future? 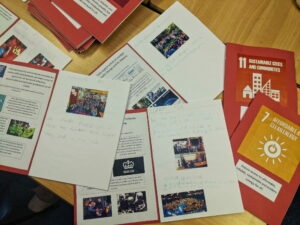 Citizenship is currently running with a Primary 7 and P 7/6 but we have plans for the P1s and P3s to go out to the care home. The links we have made are going to continue and there are lots of people interested in the citizenship groups so it is definitely something that we can see expanding.

We're also doing a lot with sustainability and the Global Goals in school right now. P5/4 are doing a lot of gardening and planting sprouts, using the greenhouse etc.

We have a plastic greenhouse outside, made with recycled bottles, and we're going to get shelving in there so we can start planting seeds in there for edible crops, which we've had in the past. We have lots of growth going on outside which was started by our gardening group last year. They entered the Trades House Citizenship Award, which they won, and then went along to present about their experience. We've got plans to develop this space further and we had a local horticulturalist, Tom Malone, come in to speak to the children about what they could do. 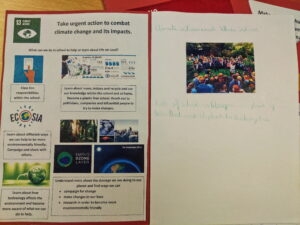 We were looking at ways to link the Global Goals to make them more visible and we've came up with the idea of having an interactive display in the corridor where we have jotters for every global goal where classes can log their work towards the Goals.

I've made them child-friendly and teacher-friendly examples of what that Global Goal actually means. The idea is that when something is done it gets recorded in the jotter with what the class name and what they've done, so they're able to promote this. So these jotters will be available in the boxes for people to look at.

Start small. Last year I was on my own with the three groups but it has actually been easier this year even though there are more groups. Support from other staff has been key.