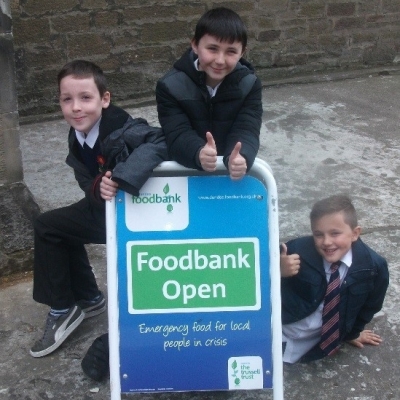 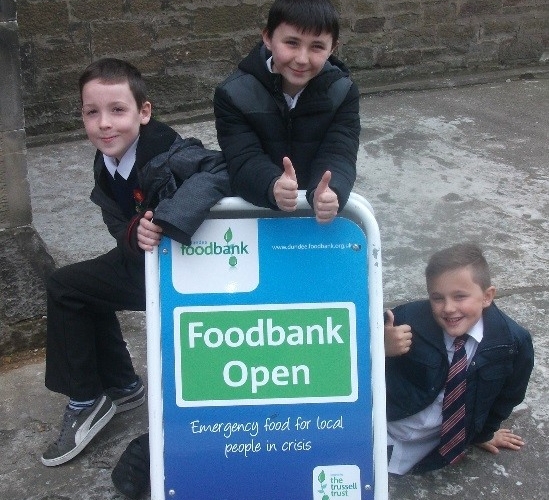 The Social Enterprise fundraising company was formed to help 3 P6 boys primarily with H&W in terms of their self esteem, confidence, team work and belief in themselves. One child in particular had expressed his strong doubt that he would ever be able to get a job. It covered areas of numeracy in the financial aspects, literacy in making flyers and posters and Global Citizenship and sustainability as well.

Initially we researched local problems and the boys decided the nearby foodbank was a good place to help others. They approached all the children and adults in school asking for donations of food. They collected food each morning and collected it in a central point in school. They used posters, flyers and the school website to advertise. After a couple of weeks they had collected 42Kg of food which they personally delivered to the foodbank. It was covered in the local press and on social media and the boys had lots of positive feedback.

The success of this encouraged the boys to continue fundraising. They made hundreds of Rice Krispie buns which they sold at playtimes and at school events. This money will grow with future projects, but the next development involved no money at all.

The boys had heard about the refugee crisis and in particular were interested that children were fleeing their homes without their favourite toys. Ross learned that children suffering from trauma can recover more quickly with a cuddly toy to hug! This was something they thought everyone would have at home - a spare cuddly toy. So they set off round the classes again, appealing to the children. Very quickly the school was full of soft toys! The boys sorted them to make sure they were safe and in good condition, before washing them all in the school football team's washing machine.

Volunteers from Dundee Refugee Support came to collect the toys, talked to the classes and gave the boys wonderful feedback. Again this was covered in the local press and social media with lots of very positive comments.

The pupils gained skills in finance, public speaking, literacy, self esteem, confidence, sustainability and global citizenship. We entered RM's 'Your Scotland' Competition and we were delighted to win first place! They boys were invited to Glasgow to present their work to representatives of Education Scotland, RM and Scottish Enterprise. This was a huge moment for them (one had never been out of Dundee - or on a train!). They had a wonderful day exploring Glasgow, being treated as VIPs at The Scottish Government Offices and visiting the Science Centre.

The project has exceeded all our expectations. What started as a Food Bank collection grew into several projects and an amazing day in Glasgow.

The pupils now have belief in themselves as agents for positive change. They can see a future where they can work and make a difference to others at home and globally.

We plan to grow the profit we have banked with more projects and the boys will choose how money raised should be spent.