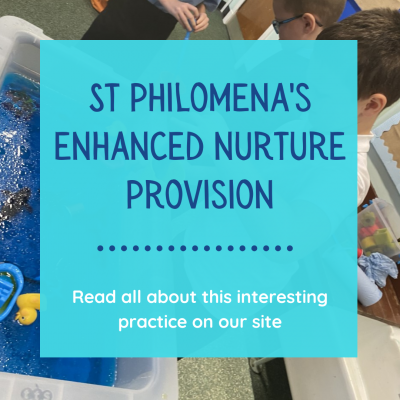 Everything we do is linked into the CfE, and how that links into our project is through topical science – so the biggest things are coming through that, and also the social side of things in terms of being a Global Citizen and looking after the planet. We also started linking our planning into the Global Goals too, for this topic it was nice and easy but we’ll be doing this going forward in terms of everything we’re doing. 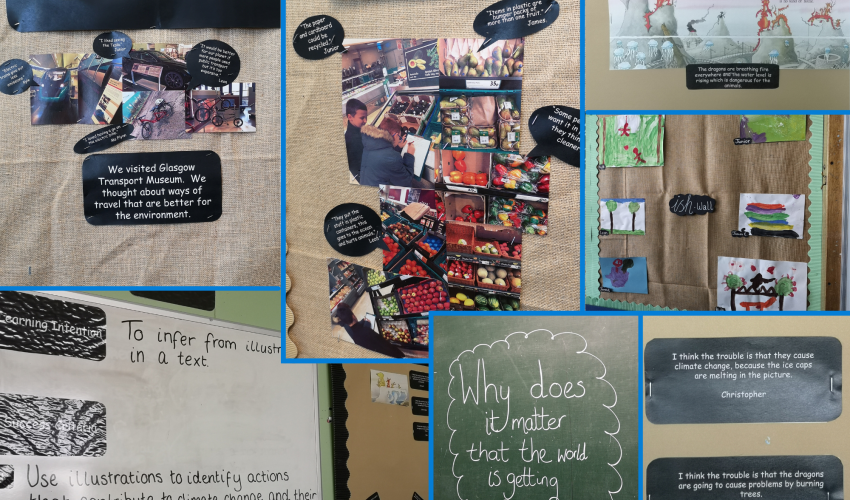 It’s really grown since the beginning. Myself and my colleague, Morven, had a plan from Easter time that this is really what we wanted to do, being aware of what was happening around us, so close to us and in our area. Then, all these things began popping up from places like My GTCS, opportunities from Education Scotland - there were just so many things appearing. Morven and I work really well together, and we’d be sending each other things at night saying, “Have you seen this?! What about that? Check this!”

There’s always a constant dialogue between us of linking up things and saying, “Well if you put our name forward for that, I’ll email them...” – so in terms of development it’s really just how we worked together anyway.

It started off as a basic plan, then it just grows arms and legs. We find that Twitter is a fantastic resource, even just to see what other schools are doing, so we can try out ideas we see on there.

We’ve developed our playroom too. We set up our playroom – sometimes in line with our topic, sometimes not – this session it does tie into our topic. At the start of term we were really struggling for ideas of what we could do around COP26, then I was lying in my bed one night and thought “Charity Shop! – and I was really excited, like it’s the best idea I’ve ever had!”

Then Morven came up with the idea of a bike station. We work very closely with St Paul’s Youth Forum which is a community action group. They’ve got fantastic projects running and one of these is their Bikeability where they teach cycling proficiency to the children and promote bikes; so they gave us tyres and puncture kits and wee bits like that. So now we have a bike repair station and we’ve got a section for recycling where you can sort out different things and also one for using water. But right now the children are really enjoying using the charity shop. I just had a bag of clothes sitting that I brought in – so there’s fur jackets and all sorts in there. I went and emptied my friend’s garage as well! 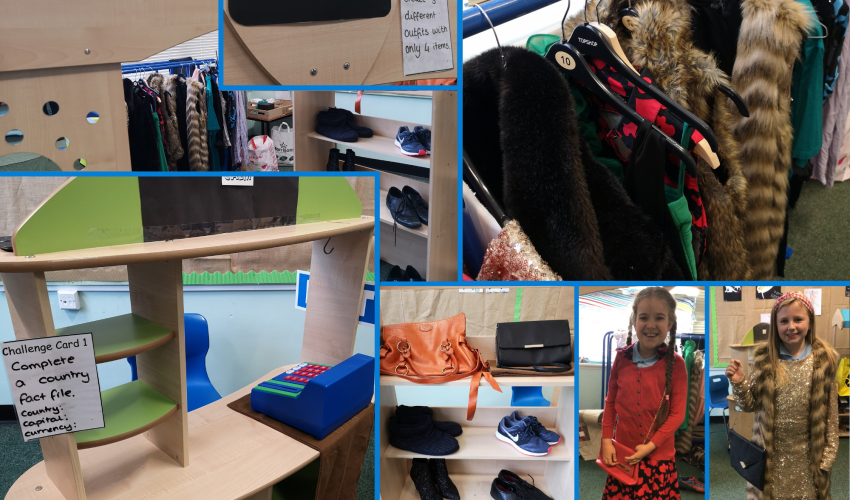 So it’s just stemmed from that initial idea, and things just pop up along the way too – I’m on Facebook all the time picking up free stuff for school. There are so many random things that just give you a wee spark.

I think for the COP26 it’s worked so well because there’s just so many other things out there - the whole of Glasgow are doing it just now so it’s great to see all the ideas and everyone sharing. It really just feeds into your own creativity because you’re seeing these ideas and thinking, ‘Yeah I like this idea, let’s try that.’

We’ve had the children watching David Attenborough, so they’re picking up on things that they may have experienced at home and then brought into school and are saying, ‘Oh I know all about this’, and it’s allowing them to share the knowledge that they already have about certain things. I think there might be an impression that children in this setting don’t care about the environment or the sustainability goals but they certainly do.

It’s something that does affect everybody, and they do have opinions about it – they’re just not the children who would usually be asked straight away. They do have strong opinions about things, but may just not be able to write a report on it.

There are so many things. We utilise the SQA’s skills framework for Developing Life, Learning and Work skills so we talk about those skills in terms of everything we do. The main ones in terms of that are Literacy, Maths and Health and Wellbeing. So for Literacy, we’ve got books about global warming and plastic pollution – children are listening and talking about these things and we’re having discussions about it. We went to the Transport Museum so we’re talking and asking things like “What do you think are greener ways of travel?”, and they were able to listen to each other’s ideas.

We’re also trying to utilise tech, with access to iPads, we have been trying to use the ‘speech to text’, but the iPads do find it difficult to pick up the children. So we are trying different things in terms of getting their views and these digital skills are something we are trying to develop but we’re just not hitting the mark with it yet.

In terms of Maths, we’re looking at graphing aspects of pollution and the outcomes of different experiments. We also use the theme of Citizenship to stimulate learning, focusing on protecting the planet – because it’s theirs, and they are concerned.

We also embed the world of work into this, so I’m always encouraging visitors to talk about what their jobs are and what they do. Again we’ve done a lot of work with St Paul’s Youth Forum and we had people in from SusTrans because we actually did a project with both of those organisations. We also involved the charity ‘A Place in Childhood’ - they’re running community regeneration work going on just now, making adaptations to a local street just outside of the school. This involved some of our children working alongside some of the children from mainstream on a Minecraft project. Our local area was developed in Minecraft – they created a Minecraft world which had the school and this street, and then the children developed their ideas of what they’d like the street to look like. It’s still at the consultation stage, and there are some boards outside the school to show you the work being done. It’s part of a larger community regeneration project called Flourishing Molendiner, but their views that came through this Minecraft project are a part of this. One of the things they talked about was closing off part of the street, the children said they wanted a play area, somewhere safe for them – maybe even a treehouse. So they really did come through in sharing their ideas in a way that meant something to them on something that was important to them and really meaningful.

They were provided with iPads that they could take home with them and work on it in their own time, developing the world in terms of what they’d like. Then they came together in Realms – to be honest it got a bit too Minecraft-y and I got left behind!

We don’t know just yet as it’s open for consultation, but the aim is that some of their ideas will come to fruition. I really hope it does, as I think it’s important for the children to see that they were asked for their opinions, people listened and here it is!

Did you get other organisations or partners involved?

We’d love to get more organisations involved, and I think it can be hard as maybe people don’t know how to get in touch with the right people, we’re always looking for people and getting in touch to find out more – a lot of it’s just luck!

We do have a great relationship with St Paul’s Youth Forum, they’ve introduced us to other organisations and through them we’ve got our bikes, they work with us on the cycling proficiency and they also work with the mainstream classes.

We work with Joe, who is involved with the Blackhill Growing Group – up at St Paul’s they’ve got polytunnels and chickens, so he comes and does some gardening here and he works with some of our ASN children then comes into us and does cooking with us using things that have been grown at St Paul’s or in our garden. We also have our own gardener called Ian who does gardening with us in our dedicated part here; there’s great things going on. They’ve got a bakery once a week, so we got the children to do an order then go up to collect it – then they were using their money to pay for the products. There are fantastic things going on with our partners in the community. We’ve also worked with St Roch’s and Smithycroft too as well as Molendiner Nursery: it really helps to bring everyone together, it is fantastic.

I think just now with COP26 there’s so much out there, and actually for someone just coming to it they might find it a bit overwhelming? You know there’s so much you could do, what path are you going to take with it?

So I’d say pick one thing, pick one element you can introduce to your classroom and ask your children. Perhaps use David Attenborough, or Newsround to find something you can use as a hook and really just find out where your children are at. What are their concerns about climate change and the planet?

Pick one thing and do it well!

Learning for Sustainability is part of a teacher’s professional development and duty and it’s popular just now too – there’s so much out there. Use other people, and use other schools to help give you ideas. 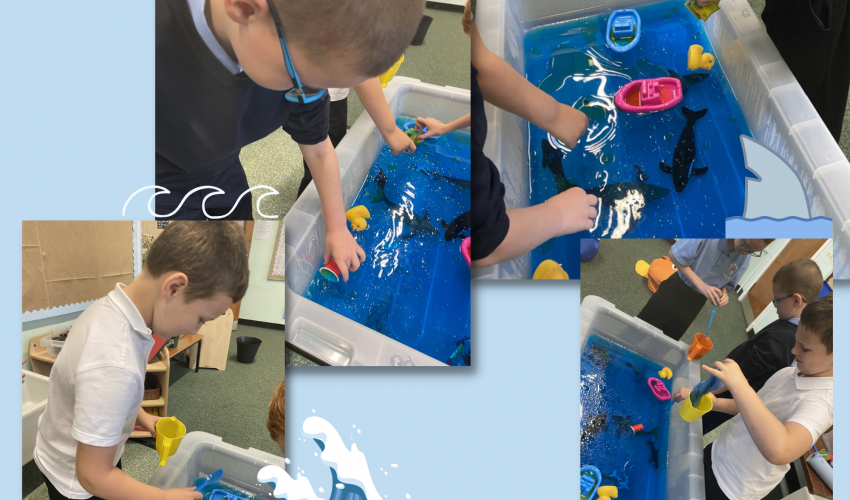 You can reach Adele at AFlynn@st-philomenas-pri.glasgow.sch.uk