Infographics, Enterprise and the Importance of Computing Science

Lewis Binnie first came across our radar a few weeks ago when he began sharing infographics he'd created himself to share information about Computing Science as a career.

Currently in S6 at St Kentigern's, Lewis already has a whole raft of qualifications under his belt and, with hopes to study towards a Masters degree in Computing Science with a speciality in Cyber Security, he has set his sights firmly on success. 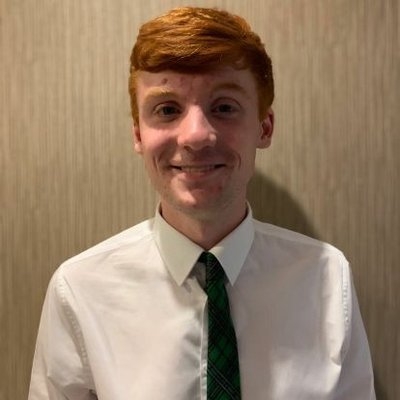 I've always been excited to go to university, ever since I was in S1, so it's definitely a route I want to go down. I'm absolutely hoping to keep growing my social platforms and online presence, as well as helping out various charities or events geared towards spreading the message of Computing Science.

As a career in the future, I'm hoping to work as an ethical hacker or cyber security engineer for the first few years in a position which will allow me to have a little bit of flexibility and enjoyment with my work - potentially allowing for travel as well. Then, when I'm settled, I'd like to work in a cyber security company helping to innovate and drive the Scottish cyber industry forward. It's an incredibly exciting prospect and one which has me smiling right now!

Obviously too old for these new terms and job roles, we did have to ask for clarity on what, exactly, ethical hacking is.

This is a good question, and it's one that also stumped me for a while in earlier secondary school years. Cyber security is a broad term, but I think of it as two sides of a coin.

There's the 'red team' - these are ethical hackers. They will assume the persona of a hacker and use their skills to attempt to (legally and ethically) break into a system, building or person.

The 'blue team' will assume the role of the actual cyber professionals within an organisation, and will organise the defense against these red team hackers, as well as real world cyber criminals targeting the organisation that they work for. Personally, I'd like to have enjoyment in the red team for a few years,then when I'm more settled I'd like to have a strong blue team position.

While having such a successful academic background is impressive, Lewis can see the importance of developing key enterprise skills in order to prepare himself for real-life experiences.

There are a large number of students, my age and younger, that are so focused on the ideology that getting one hundred percent straight A's will guarantee full success - this a wrong mindset to have.

Of course, you need to meet the grade boundaries set by universities, colleges or apprenticeships, but you also need to stand out above the crowd. If universities have hundreds of students all with four, five, six A's or B's,they're going to pick the students who have demonstrated in their personal statements that they love their field of study,and have the qualities to succeed. Not that they can do only well in an exam hall.

Lewis is currently participating in the Caritas award at school and the charity he's chosen to volunteer with is dressCode. dressCode is a charity set up by Computing Science teacher Toni Scullion to inspire and encourage girls into studying the subject.

Since the lunchtime clubs are closed as of now, I'm not able to physically volunteer. So, I've taken to planning and creating fun presentations, infographics and games to give to students in S1 - S3 to inspire them to be the next generation of computer scientists at St Kentigern's Academy! It worked for me certainly when I was in S1, and I want to pass this forward and do my part as well."

Having been an inspiration to Lewis herself, Toni said that it's been a pleasure to watch his growth and development within the school:

It has been an absolute pleasure to watch Lewis develop through his six years at St Kentigern's Academy. It was very clear from an early age that Lewis had a real potential and huge drive to learn, including being extremely committed by completing online courses and summer courses.

Lewis is an agent of change and has cleverly identified a gap for engaging the next generation. His infographics are brilliant, creative, eye-catching and contain just the right amount of detail that makes them perfectly pitched for pupils. It's brilliant to see a pupil wanting to inspire others and actually making waves on a National level. Lewis is already identifying areas to expand his idea such as collaborating with industry and making engaging infographics to promote their sector at grassroots level.

He is an incredibly talented pupil and I know he will go on to do wonderful things in the world of tech! Whatever university he attends and company he works for are going to be extremely lucky! It has been an absolute honour to have taught Lewis but also to work with him in a professional capacity through dressCode. I am so proud of everything Lewis has achieved and cannot wait to see what he achieves in the future, I'll be cheering him on all the way!! Well done Lewis!

During his time at school Lewis has had the opportunity to get involved with opportunities such as working with Police Scotland, developing digital products in use within his school and undertaking internships which he says have been amazing.

Some of them were experiences that I learned single things for, such as the online qualifications I gained, but the experiences such as being a Police Scotland Youth Volunteer and Cub Scout Leader have given me invaluable life skills that I couldn't have been more grateful for - they have allowed me to develop creativity, leadership, independence and organisation all at once. If there is one thing I recommend that anyone writing a personal statement does, it's ensuring they have extra-curricular volunteering or real-world experience to back them up.

One of the opportunities that Lewis credits with the development of these important meta skills was the summer school he took part in with Newcastle University.

The CyberFirst courses were probably the best real world experience I've ever had with Computing Science and Cyber Security. I got to live in university accommodation and meet so many like-minded, amazing people my own age who I still talk to today.

In addition to this, I was given a full, week-long curriculum of practical experience in my field. We were given guidebooks packed with ethical hacking and security labs, tips, tricks and links to research on my own! I had the back two pages of my notebook packed with links, names and scribbles, which I looked over for days once back home. The lecturers and assistants were all trained cyber security professionals, and so gave us great real-world stories to inspire us.

Out of the entire course, one anecdote from Paul Mason (Lecturer and a Cyber Security Expert) stuck in my mind more than the rest. He didn't use any complicated technologies or software. He just simply told us a story.

He recalled the time he socially engineered his way into a building by bluffing past the security team, disabling the lift mid-way up the building, waiting until three in the morning, resuming the lift and then causing havoc with the systems on the management floor. This story, combined with the other experiences I had in those weeks, prompted me to properly begin my journey in cyber security, and I couldn't be more grateful for it.

Lewis has always been interested in computing science, but credits an enterprise he launched with a friend in S1, where instead of joining online servers to play Minecraft, they started their own.

We decided one day to start our own server, and so I began tinkering around with plugins, add-ons and console panels to enhance the gameplay for our players.The server actually ended up generating us quite a lot in revenue for two 14 year olds.

I joined some programming clubs in S2, where I learned my first programming language, (whether people class it as one or not!) - HTML and CSS, which is website design. Through my S3 curriculum, I began learning Java, which is the language I am most proficient in.

When I began to add all these tools to my belt around age 15, I decided to branch out into even more interesting areas, trying out each one and growing my love for the field. I tried developing websites, making video games, creating phone apps and programming robots. This then of course led into me taking Computing Science in my National 5 and Highers.

Lewis says that as much as the whoIe field really interests him, the ability to use all of these skills in almost every walk of life, and in every company or project, makes him really excited for the future.

With specialised events such as Ada Fest and the formation of organisations such as dressCode with a specific focus on encouraging girls into the study of computing science, Lewis thinks that there is still work to be done in order to ensure that future roles are filled.

Toni Scullion - who he credits as a mentor and teaches at his school is someone, along with Edinburgh Napier University's Professor Bill Buchanan OBE, that he considers to be leading the way in creating an environment that will draw individuals in and allow them to thrive.

The current engagement rates in Computing Science across Scotland are scarily low for the booming culture we live in. We need to inspire more younger students to take the subject, and promote its amazing, inspirational and incredible aspects, rather than allowing it to be disregarded and branded with words of negativity - such as 'boring', 'too hard' or 'for boys'. This is why I'm doing my best to work myself and assist various charities, people and events to spread this message.

So what of the infographics that Lewis has created and pushed out across his social media platforms?

I originally wanted a way to grow my Twitter, to allow myself to spread the messages and information I wanted to share with the industry in Scotland,specifically the message of #ChooseComputing.

When researching ways to grow an account, I managed to find that images often generate more clicks, especially appealing ones such as posters or infographics, so I decided to give one a shot to see if it would happen!

Lewis said that his innovative infographics didn't require a lot of time to design as he doesn't credit himself as much of an artist so didn't focus overly on this. However, the actual content of the infographics was created over a short while spent writing ideas, researching opportunities and more. This allowed him to think about the best way to push his message out to the general public. He now runs polls on Twitter to see if there are any infographics that specific people, or the general following, want to see!

As far as Lewis is concerned, his infographics haven't been created with a desperate drive towards a particular goal, his best case scenario is to spread them to parents, teachers and students in order to get the message out to as many people as possible. Anyone is free to use the infographics wherever they want, whether it's classroom walls, flyers to hand out, website articles or just conversation!

We can't wait to see what Lewis does next, and keep your eyes peeled for the infographics making their way onto our resources page as a way to inspire learning in your own students.