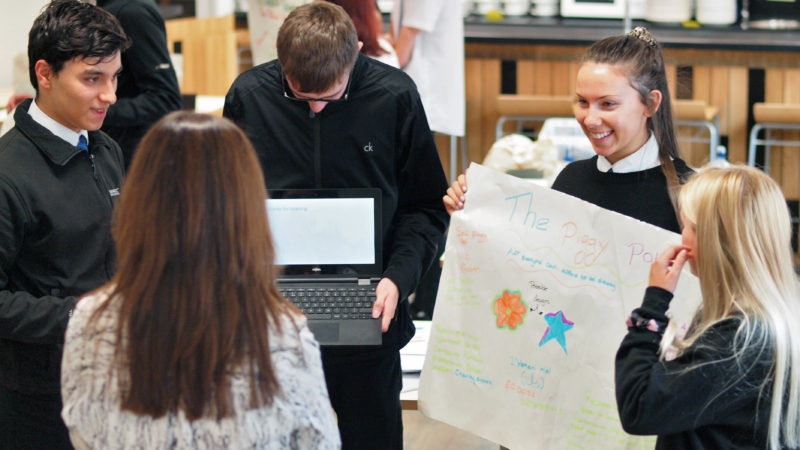 Midlothian pupils in S5 and S6 took part in a day of entrepreneurial learning supported by Edinburgh Innovations.

The organisation supports University of Edinburgh staff and students turn their enterprising discoveries and inventions into commercial ventures.

The 24 pupils from Newbattle High School were asked to research real-world commercial and societal needs, using these to generate ideas for business and social enterprises. They then presented their enterprising ideas in a 'dragons-den' style pitch.

Enterprising Learning on the Day

With the support of advisers from Edinburgh Innovations, pupils spent time researching challenges that could be resolved through a new product or service - and the groups came up with some really inspiring business ideas!

Enterprises pitched included an app to combat bullying, a political news podcast, road construction using recycled plastic, a donations scheme for those affected by war in Yemen, and a cooling face-mask to relieve headaches.

"The statistics we discovered when researching our idea have shocked us," said S6 student Jack Grieve, whose team proposed the anti-bullying app.

The ideas we've come up with as a team for the first release of the app have been really good. I've never really thought about starting a business, so everything we did today was learning.

As the day progressed the groups worked on their business pitches, preparing for their potential investors - the rest of the class.

"It's been fantastic, giving the pupils a feel for the flow of idea generation and entrepreneurship, and exploring the idea of what a social enterprise is," said Depute Head Teacher Mark Davidson.

It's heartening to hear young people's passions. Every pitch was looking at delivering some sort of social responsibility, or getting young people engaged in political life, or about the health and wellbeing of young people. It's really good as adults to be in the room and see that positivity from young people.

The Enterprise Education day was part of a continued partnership between Newbattle High School and Edinburgh Innovations, with the high school being designated Scotland's first Digital Centre for Excellence through their partnership with the University and Midlothian Council.

The school are working with universities, colleges, and businesses to ensure their pupils are equipped with digital industry skills that will better prepare them for their future workplace.